← more from
Warm Winters Ltd.
Get fresh music recommendations delivered to your inbox every Friday. 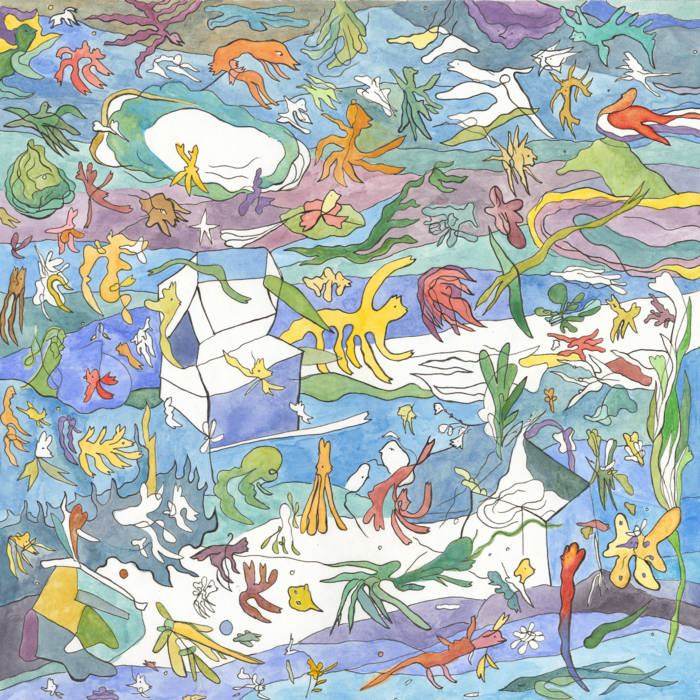 s3r❤g31d3❤m1n Painful and charming listening experience · Favorite track: Hell Is You, Yourself.

At heart, Stas Sharifullin is a supporter. His label Klammklang (co-curated with Julia Sharifullina), his teaching work, his shape-shifting multi-disciplinary artistic practice and his other projects are all a testament to his unique ability to work alongside and lift others up. Perhaps that’s also part of why he has never released a full-length record under his HMOT moniker – until now, he’s been too busy helping others.

But his first ever full album – ‘This Music Greets Death’, written between 2014 and 2021 – is finally arriving. A grim-sounding title is accompanied by a soft watercolour painting of strange, gentle creatures and their unknown world. A curious juxtaposition. But all is clear to Stas Sharifullin, and everything is as it should be. “This is a record about the horizon of possibilities,” shares the Moscow-based sound artist. Here, death signifies a new beginning, a clean slate, a starting point of discussion. We’ve gotten this far and everything has gone wrong – where do we go from here?

In a sense, this is a record of extra-ordinary optimism, a record celebrating curiosity and hope, despite an opening track which could be interpreted as nothing but bleak. “What if the consensus is simply self-erasure?,” asks Rupert Clervaux in an almost matter-of-fact tone. The music which follows, however, is unified by a sense of wistful playfulness and incredible fluidity. It’s obviously electronic music, made by a human using various machines, but it’s seemingly humanless, self-generating, just emanating organically. Melodies meander unpredictably, loops intertwine like malfunctioning music boxes. Some pieces end abruptly, reminding you of that feeling when a cloud suddenly covers the sun on a summer day; others feel like they could go on forever and you wouldn’t ever notice.

Stas Sharifullin’s collaborative spirit shines through in half of the tracks, with Rupert Clervaux, Nikolay Kozlov, Perila, Zurkas Tepla and Julia Sharifullina making appearances as either co-producers or vocalists, their contributions adding unique, but subtle flavours to the pieces which slot into the fullness of the album seamlessly.

Perila adds her usual dose of spectrality to the almost-uplifting single “Climb Higher”, while Nikolay Kozlov provides his trademark barely-there dub sensibility to “Fake Feathers”. “Oneiropolois” is a jarring, cleansing short piece featuring Russian electronic punk artist Zurkas Tepla. “Carousel” is a bubbly, yet melancholy, “Goodbye Black Sky” – which alludes to Krasnoyarsk and the local ecological disaster – is brooding and beautiful. Throughout the record, HMOT walks a thin line: this music is about something ending, but perhaps even more it’s about something beautiful rising from the ashes. And that’s precisely why ‘This Music Greets Death’, it welcomes it with open arms, because it knows things can only get better from here.

"...elegiac-abstract synthesizer sounds, cloudy soundscapes, meticulously arranged sound games. Through features with the lyricist Rupert Clervaux, who already thinks about the philosophical question of suicide in the opening piece with a sonorous voice, the ambient pop hope Perila or noise weirdo Zurkas Tepla, Sharifullin gets other impulses and thus expands the already broad range of sounds around their distinct voices. That makes this album a matter of different styles and moods that breaks with common ambient clichés: This music has to be listened to with full awareness. Because a good thing not only needs time, it also needs the necessary attention." - Kristoffer Cornils, musikexpress.de

Bandcamp Daily  your guide to the world of Bandcamp

Kari Faux drops off her deluxe album 'Lowkey Superstar' plus tunes by Shunaji and Samplelov.